sorry for the delay.. but here is part two of the asian invasion of my blog!

this is one of the most successful recipes i’ve made so far at school.  i improvised slightly with my ingredients because i didn’t have exactly what i needed, but i’d say it came out even better than expected.  oh, yeah, and IT TASTED EXACTLY LIKE REAL CHINESE FOOD (except for the minor fact that i did not fry the chicken).

this sauce is quick and simple (although it looks like it has a lot of ingredients– they are all pretty common!).  start by chopping your ginger and garlic very finely and zest the orange.  in a medium size bowl, combine the water, orange-mango juice, freshly squeezed orange juice, vinegar, and soy sauce together.  next, add the brown sugar and stir until it is well incorporated and there are no lumps.  then add the chili garlic paste (like siracha or this more chunky version that i loveeeeee) to your taste (add more or less depending upon your spicy tolerance!).  lastly, add in the ginger, garlic, orange zest, and chop a few green onions for color and a little crunch. 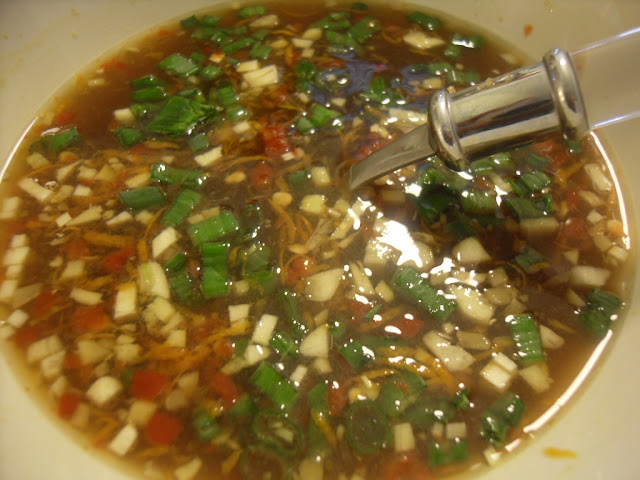 while the sauce sits and the flavors combine, take two fresh chicken breasts and cut them into bite-size pieces.  as you know, i like the organic and humanely raised brand at The Krog.  its considerably more expensive than regular chicken breasts, so use whatever you have or like to buy, but i always feel better about what i eat when i buy organic meats.
in a skillet, drop a little bit of olive oil and sauté the chicken until it is brown and crispy on all sides. don’t cook it all the way through because it will continue to cook in the sauce. 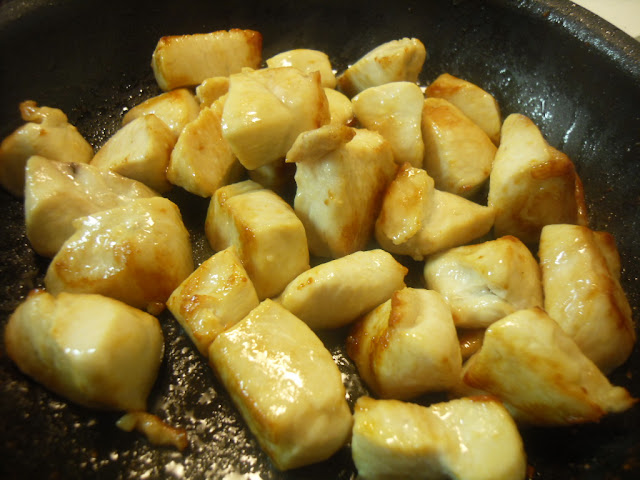 once the chicken is browned, take it out and set it aside.  in the same skillet, add the sauce to the pan and simmer it on medium-low.  while it simmers, in another little bowl stir 3 tbsp. of cornstarch into the 2 tbsp. of water and stir vigorously until it is combined, making sure there are no lumps of cornstarch in the bowl. (* you just made a slurry!  this will be used to thicken the sauce!). when the sauce is bubbling, add the slurry and stir quickly.  right before your eyes, the sauce will begin to tighten up. 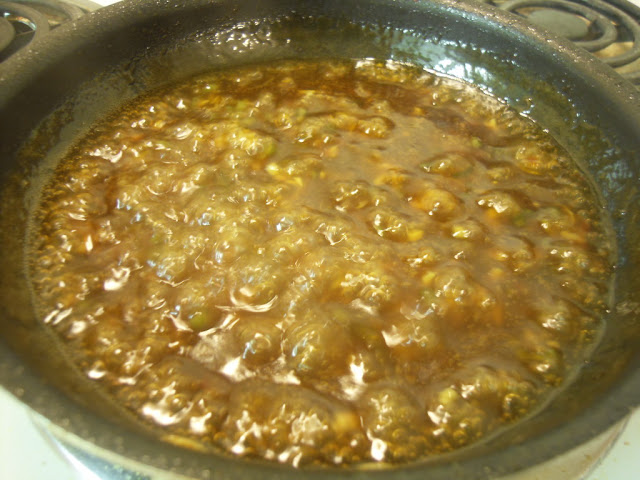 at this point, add the chicken back to the sauce and finish cooking the meat right in the sauce.  *note: watch your temperature while you have the sauce on the stove– make sure it is on low to medium low!  there is a lot of sugar in this particular sauce and it can burn easily!** 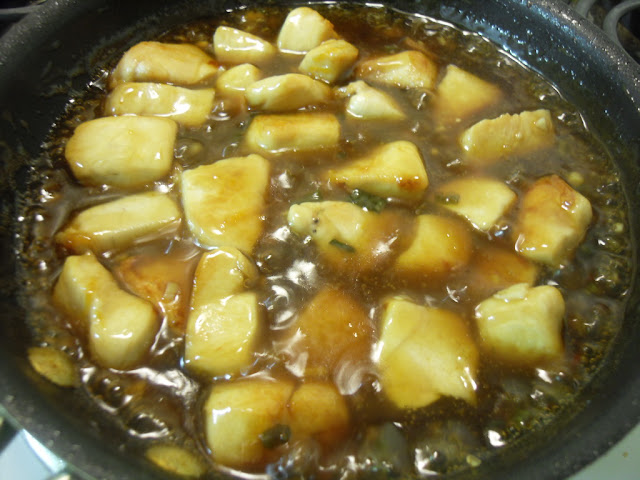 after about two or three minutes simmering in the sauce, your meal should be done!  serve the chicken in its sauce over a steamy bed of white or brown rice with the vegetable of your choice– (or some wonton soup :] )  top with some fresh green onions and you have a chinese take-out meal to die for! 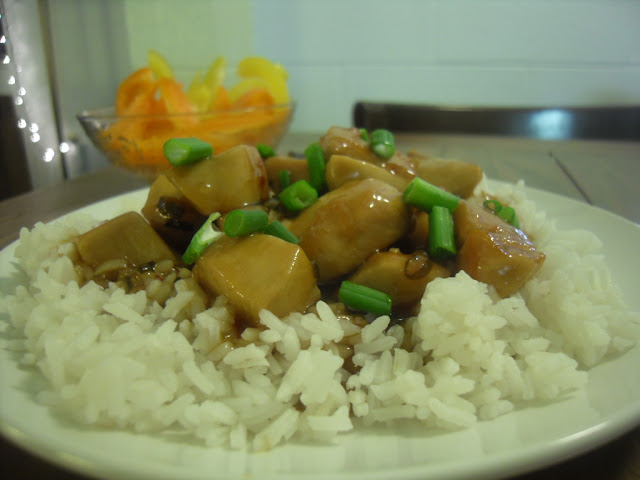 chinese food is absolutely delicious.  i crave it all the time and can eat it multiple times in one day.  however, i refrain from doing so very often for multiple reasons.  number one, chinese food is an expense that i don’t need on my wallet (even though my trusty yuan ho is super affordable).  and two, it is nutritionally horrid for you.  yes, you can make “good choices” at a chinese restaurant and order off the icky bland diet menu, but who wants to do that?

so, this week i decided to whip up two of my favorite chinese dishes at home and see how close i could get them to the original.  i started by making steamy wonton soup and then finished with an incredible version of orange chicken (in my next post!).  here we go!

traditionally, wonton soup has a pork filling but i decided to use shrimp instead because i always have some in my freezer.  some people use raw shrimp in the filling, but i am wary about it cooking all the way through since the wontons take such a short time to boil.  eyeball about half a pound of shrimp (thawed) and toss it in your food processor (or magic bullet).  pulse it gently until the shrimp is chopped in very small pieces.  *note:  if you don’t have a food processor, just use a knife and mince the shrimp by hand!

next, add the soy sauce, sesame oil (again, this is strongggg so go easy on it!), chopped cilantro, and minced ginger (use more or less to your taste!)  stir it all together and the filling is all done!

take your wonton wrappers (i like the square ones– you can find them in the refrigerated section in the produce area, around where you’d look for tofu) and lay them out on a large work surface.  keep a damp paper towel over the unused wrappers so they don’t dry out as you work!
using a regular cereal spoon as a guide, spoon about a tablespoon of filling in the center of each wonton wrapper.

now that the filling is in place, take a little bowl of water and, using your finger, wet two touching sides of the wonton and fold the wrapper over, pressing the wet and dry sides together.  the wonton should look like a triangle!  then, pull the pointy sides down and forward gluing the back of one pointy side to the front of the other pointy side with a drop of water (see this step here!, i forgot to take a picture!).

my batch of filling made 22 wonton total, but yours could make more or less depending upon how full your fill your dumplings.  here’s some of mine, all done and ready for the water!

some people like to boil their wontons in the broth, but i’ve heard that it makes the finished broth cloudy. so i like to boil my wonton separately and float them in the steamy broth when the time is right.  put on a large pot of water to boil making sure you plenty of room for the wonton to float around.  drop them in six at a time for a mere three or four minutes, until the wonton wrappers are translucent and flexible.  fish them out and let them cool on a plate.  they look delicious!

now for the broth– you’ll need:
-a box or two of chicken stock (i use the natural, 33% less sodium kind)
-two slices of ginger root
-one big garlic clove, sliced in half
-small bunch of cilantro
-two or three green onions
-crushed red pepper flakes
-soy sauce
-a dash of sesame oil
the broth of wonton soup is KEY.  it has to taste super flavorful and not just be a weak chicken broth with nothing exciting about it.  so my solution is to infuse regular chicken stock with tons of great aromatics.  the reason i say you’ll need one or two boxes of stock is because it depends upon how many people you’re serving.  if you want a lot of soup, infuse two boxes of stock.  if you want enough for 4 as a big appetizer or soup course, just use one box.  *note: if you’re using two boxes of stock, just double the following steps!
very simply, take a small bunch of cilantro (whole, not chopped), three green onions (in thirds), two slices of fresh ginger, one large clove of garlic (just cut in half, not chopped), a splash of soy sauce, a dash of sesame oil, and red pepper flakes to taste.

let this simmer on the stove on ‘low’ for about 15 or 20 minutes.  this way, all the delicious flavors will infuse into the broth and make a great soup for the wontons!  at the very end, strain out all the aromatics and you’ll be left with a spicy broth.
after the broth has simmered, add as many wonton as you’d like to the pot to reheat them (just for a minute!) and serve it up in a large bowl.  i like to eat my wonton soup with a side of rice and a few green onions sprinkled on top.

YUM.  enjoy this appetizer!  and keep a look out for my next posting… orange chicken :]