We woke up Thursday morning ready to head out on our adventure at 9AM.  I made some breakfast with Icelandic eggs, bacon, and apple cake to get us started off on the right foot.  Our apartment’s kitchen is… “efficient”, to put it kindly, so I figured out how to make breakfast for 6 with only a few pots and pans.  There was a coffee shop, Reykjavík Roasters, down the street and Alec knew their coffee well so he popped down and brought some back for breakfast.

I set the food out and had a little friend peeking at me from the end of the table!

Our Airbnb host was also out tour guide for the day since we had the baby and didn’t want to commit to an 8 hour all-day tour with 100 other tourists.  We were set to leave at 9, but Johannes must have been on Iceland time so we didn’t leave until closer to 10AM.

We piled in to Johannes’ jeep and set out to see three sights: the Gullfoss waterfall, the Haukadalur geysers, and the Þingvellir National Park.  These were three stops on the “Golden Circle”, or a set of popular natural sights that most people like to see when they visit.  We were only going to these three, however, so we joked that it was the “Golden Line” tour :)

Since we had chosen this set of sights, we decided to go to the furthest first, about 2 hours away, and work our way back.  Little Eva took a nice snooze during the ride out.  It was overcast and a little chilly but even the clouds were beautiful!

We arrived at Gullfoss, or the Golden Waterfall, which is one of Iceland’s most popular and beautiful waterfalls.  It is located in a canyon of the Hvíta River and is made up of water that melted from the Langjökull glacier.  It is truly spectacular; the view from the front is grand and the spray from the falls themselves blanket the area in a soft fog which adds to the mystery of the area. 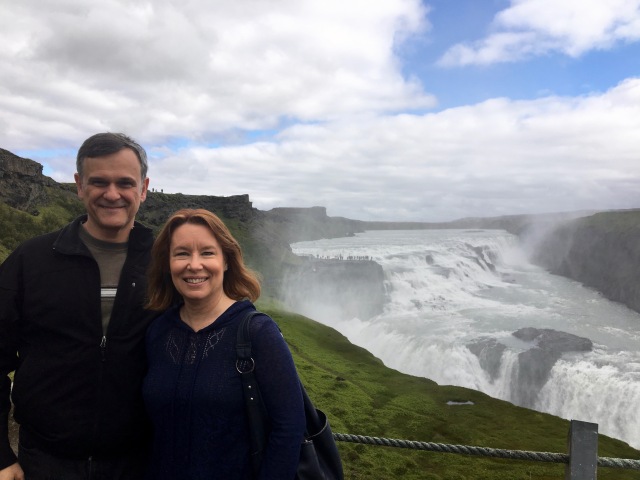 There is a path along the ledge where you can walk through the spray to get to the edge of the waterfall for even more spectacular views of the “staircase” and crevice that the water has dug itself over hundreds of years of rushing water. 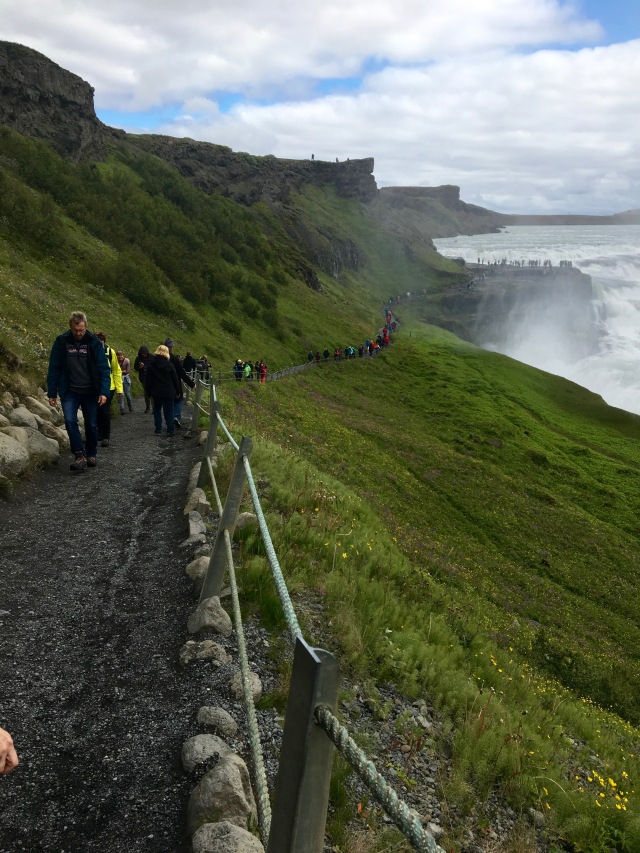 Here is the view from the edge of the waterfall, and then another pointing back to the staircase and crevice:

We climbed back to the front of the falls and up a set of steep stairs to the overlook at the top of the cliffs.  It was a beautiful sight to see!  I snapped a selfie with some of the family…

…and got my first jumping picture of the trip with the stunning landscape behind me.

We piled back in Johannes’ jeep and made our way to the next stop, the Haukadalur Geysers.  They were only about a 15 minute drive back in the direction we came.

Haukadalur is a valley with tons of geothermal activity which has caused geysers and geothermal pools to form in various spots.  The biggest geyser is named Geysir, which is actually where our word “geyser” comes from to begin with.  It is said that Geysir has been active for 10,000 years and used to erupt frequently, sometimes as a result of earthquakes (or with the addition of soap!) but Johannes told us it hasn’t had a proper eruption since 2009.  It was nice and quiet on the day we arrived. When it DOES erupt, it can shoot boiling water up to 70 meters in the air!

Since the geothermal energy also releases hydrogen sulfide, the area smelled fairly strongly of rotten eggs (the sulfur smell) when you got a puff of the steam emitted from the geysers.  Up close, once the steam wafted away, you could even see the hyperthermophiles, or organisms that can withstand incredible heat and live inside the springs.  This one was blue!

There were several other geysers just a few meters from each other.  The most popular, Strokkur, faithfully erupts every 5-10 minutes and blows water super high in to the air.  I got the end of the eruption in the picture below:

In total there are about 30 geysers in the valley.  It was really amazing to see them all, and the steam rising from the ground.

My brother snapped this great jumping picture in front of the smallest geyser, Litli–Geysir.  I got one of them just afterwards! 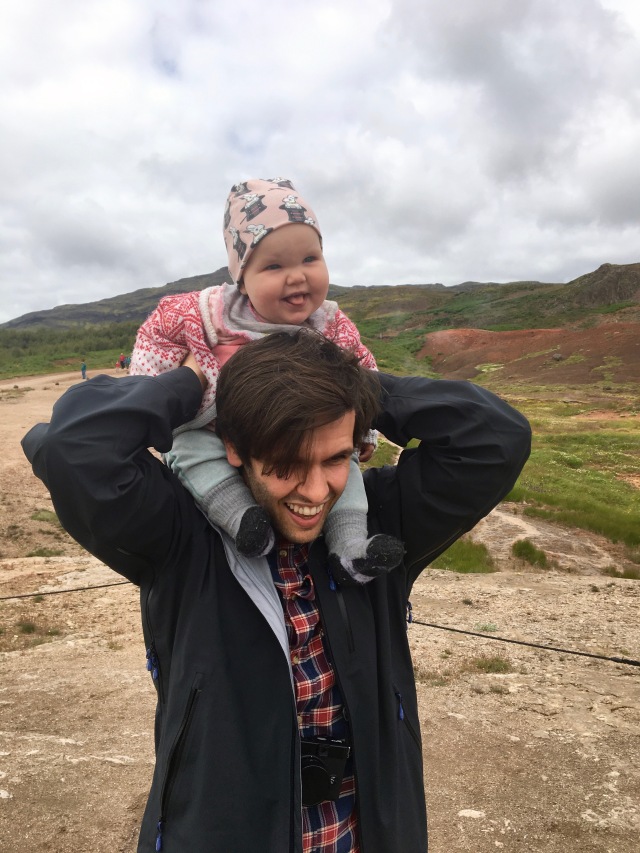 After exploring for a while, Eva needed some lunch so we joined her in the rest area.  There was a nice cafe and shop with tons of tables and Eva crawled all around and made some new friends (and ate a bunch of our cheesecake!)

Finally, we made our way an hour back towards Reykjavík en route to our last stop. Even from the windows of the car I couldn’t resist taking pictures of how green everything was!  Look at these mountains:

Our last stop was Þingvellir National Park (pronounced Thingvellir).  Althing, the national parliament in Iceland, was established here in 930 AD.  Today it is still home to a lot of historical artifacts and some truly spectacular natural wonders protected now as a World Heritage Site.

Johannes dropped us at the bottom of a ridge so we could hike around the park. Eva couldn’t find her hat so she borrowed my dad’s.  Newest generation of Capitals fans ;)

Up at the top of some cliffs we found the most beautiful waterfall I’ve ever seen called Öxarárfoss.  It was hidden away a little bit and surrounded by huge stones and rocks.  I could have stayed there all day! 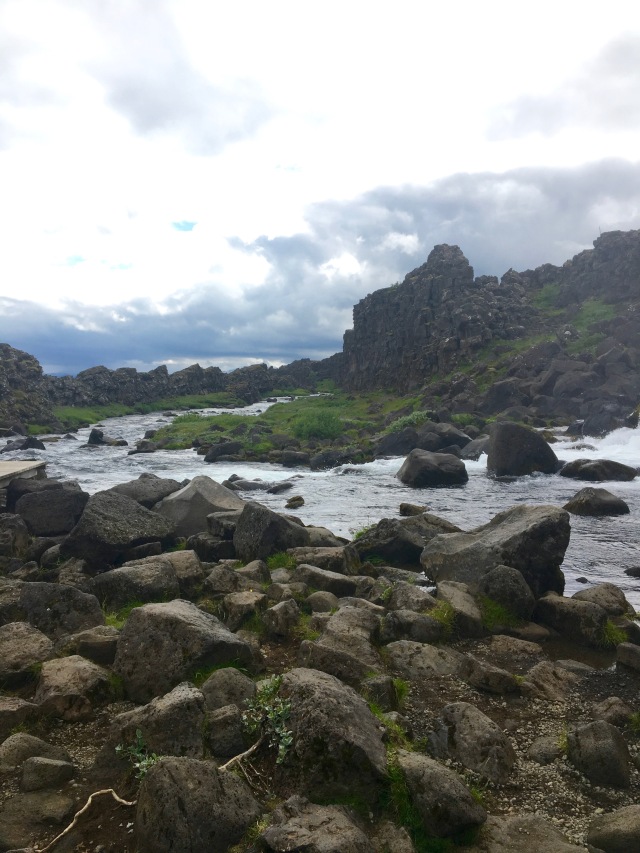 It was a spectacular place for pictures! 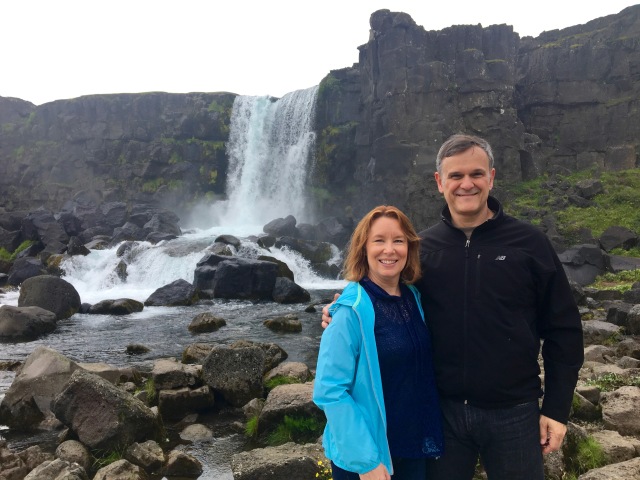 And my favorite jumping picture of the entire trip!

Even turning around from the waterfall in the other direction, the cliffs were green and lush.  I felt like I was in Scotland! 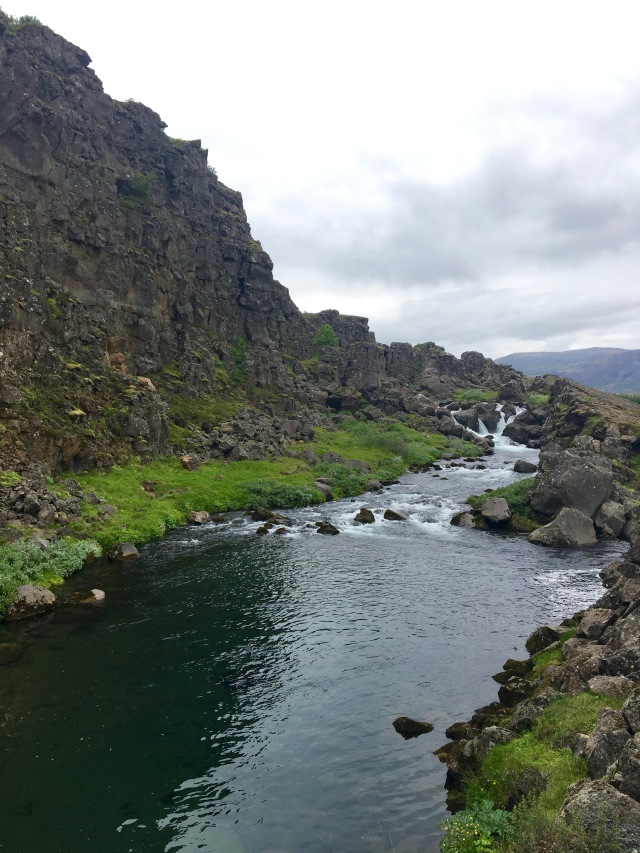 We walked hiked along to another overlook where we could see the entire beautiful Icelandic countryside in front of us.  Breathtaking. 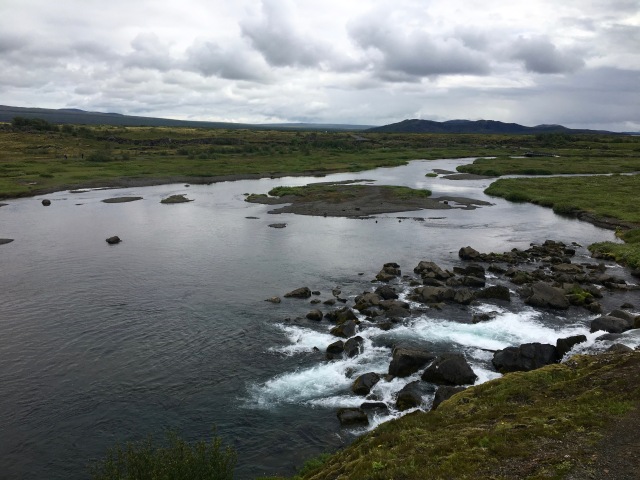 At the highest point of the park we also saw the best view of volcanic activity so far: wrinkly and folded hardened lava rocks all around us!  Look how slowly that must have set over hundreds of years.  SO COOL. (Literally!)

Tired and happy, we got back in to the car and made our way back to Reykjavík after a long day of exploring.  We relaxed for a while and my mom read with squishy Eva while Alec and I went to the Vinmonopolet (liquor store) and found some Thai for takeaway. 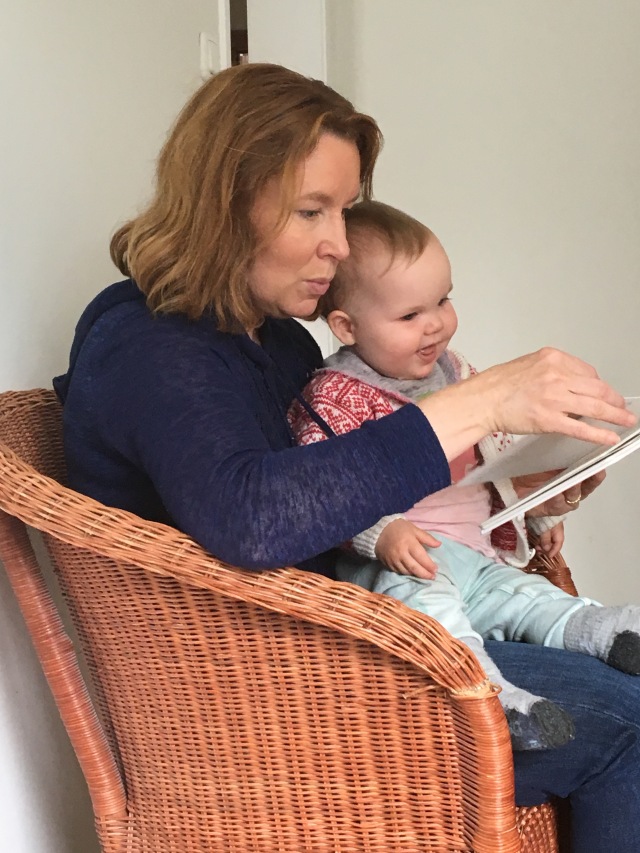 What a fantastic day we had.  We were all asleep by 9!